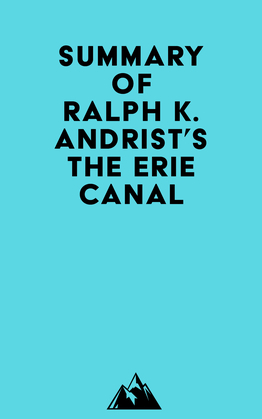 by   Everest Media (Author)
Excerpt
Nonfiction History History by country United States
warning_amber
One or more licenses for this book have been acquired by your organisation details
EPUB
55 loans, One at a time
Details
EPUB
40 loans, 10 Concurrent loans
Details

#1 Morris, a member of the First Continental Congress, spoke of the future of the country during the summer of 1777. He spoke of a waterway that would span the wilderness of upper New York, connecting the Hudson River with Lake Erie.

#2 The American war for independence was won in 1783, and Americans began heading west to find land of their own. The trail through the mountains between the gap cut by the St. Lawrence River and Alabama was not a smooth and easy route, as it was blocked by rapids and impassables.

#3 The Delaware River was one of the most popular routes for people moving west. It was difficult to navigate, but it allowed people to travel by wagon.

#4 Many plans were made to improve the waterway. One was presented by an engineering genius named Christopher Colles in 1784, who proposed a project to improve navigation on the Mohawk River. He believed that it would be possible to travel strictly by boat from the Hudson River to Lake Ontario, and possibly Lake Erie.