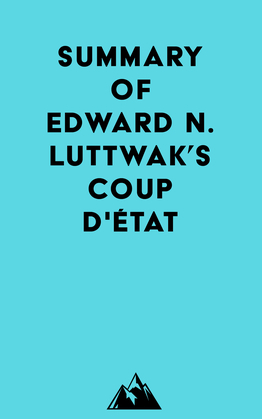 #1 The modern state depends on the permanent machinery, which can follow and control the activities of lesser organizations and individuals. The growth of modern state bureaucracies has two implications that are crucial for the feasibility of the coup: the emergence of clear distinctions between the permanent machinery of state and the political leadership, and the fact that state bureaucracies have structured hierarchies with definite chains of command.

#2 The state is a machine that functions in a fairly predictable and automatic manner. The coup takes advantage of this behavior both during and after the takeover, during the coup because it uses parts of the state apparatus to seize the controlling levers over the rest, and afterward because the value of the levers depends on the degree to which the state really functions as a machine.

#3 The life span of regimes has decreased while the life span of their subjects has increased. People have become less attached to the system of constitutional monarchy in the nineteenth century, and have instead gone over to Germany to shop around for a suitable royal family.

#4 The term revolution has gained popularity, and many coups are labeled as such because it implies that it was the people rather than a few plotters who did the whole thing.