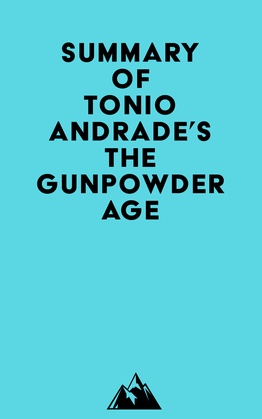 by   Everest Media (Author)
Excerpt
Nonfiction History History by country Asia China
warning_amber
One or more licenses for this book have been acquired by your organisation details
EPUB
55 loans, One at a time
Details
EPUB
40 loans, 10 Concurrent loans
Details

#1 The story of gunpowder’s development into a deadly technology is a vital part of global history. It’s also fascinating and bizarre. Early gunpowder weapons were not like the weapons we think we know, such as cannons and muskets.

#2 The Chinese were the first to experiment with gunpowder weapons, and it was during this period that the process of developing new weapons took place. The Song Dynasty, 960-1279, saw the most momentous developments in military technology in human history until the twentieth century.

#3 The Song dynasty was a time of efflorescence in China, and the city of Kaifeng was the largest in the world. The Song developed an advanced monetary system that allowed their citizens to spend their cash on a wide variety of goods and services.

#4 The Song dynasty in China was home to many technological advances, from the magnetic compass to the toothbrush. The people of the Song may have even become anatomically modern before other people.