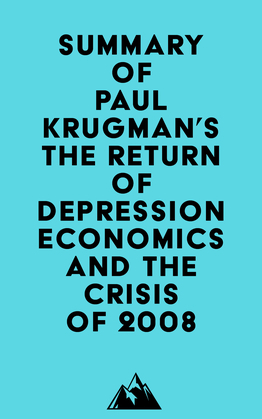 by   Everest Media (Author)
Excerpt
Nonfiction Business & economics Economic conditions
warning_amber
One or more licenses for this book have been acquired by your organisation details
EPUB
55 loans, One at a time
Details
EPUB
40 loans, 10 Concurrent loans
Details

#1 In 2003, Robert Lucas, a professor at the University of Chicago, gave the presidential address at the American Economic Association’s annual meetings. He declared that the central problem of depression prevention had been solved, and that modern macroeconomic policy had reduced the problem to the point that it was more of a nuisance than a front-rank issue.

#2 The collapse of socialism happened in China in 1978, and was reflected around the world in the 1990s. The effects were favorable to the political and ideological dominance of capitalism.

#3 The collapse of the Soviet Union had many positive effects, but the most significant was that it allowed millions of people living under Marxist regimes to become citizens of states prepared to give markets a chance.

#4 For the first time since 1917, we live in a world where property rights and free markets are viewed as fundamental principles, not grudging expedients. The unpleasant aspects of a market system are accepted as facts of life.