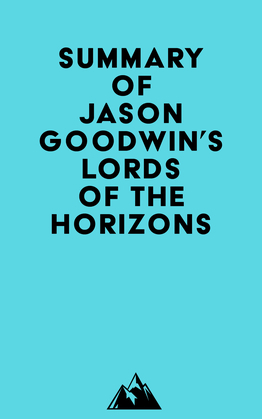 Summary of Jason Goodwin's Lords of the Horizons

by   Everest Media (Author)
Excerpt
Nonfiction History History by country Europe Eastern
warning_amber
One or more licenses for this book have been acquired by your organisation details
EPUB
55 loans, One at a time
Details
EPUB
40 loans, 10 Concurrent loans
Details

#1 The Eurasian steppe is a region of scrub and feathery grasses that stretches from the borders of China to the shore of the Black Sea. Steppe dwellers range the grasslands with their flocks, living in tents, and riding the short, hardy Turkish pony of the steppe.

#2 Islam was spread by caravan through the Middle East cities, and by the sword. It was a powerful weapon in the struggle against uncertainty and change, as it was a firm religion with clear rules.

#3 Islam’s genius for movement, however, remained ceremonial. By the caravans that traveled across the Islamic world, carrying sacks of spices and gold, many of the luxuries of the known world were handled by Muslim merchants.