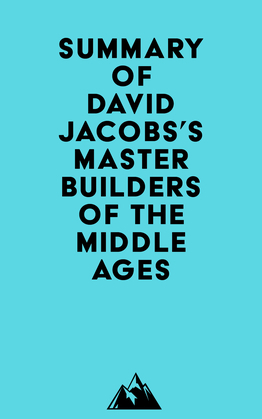 Summary of David Jacobs's Master Builders of the Middle Ages

by   Everest Media (Author)
Excerpt
Nonfiction Science and technics Technology & engineering Architecture, construction Landmarks & monuments
warning_amber
One or more licenses for this book have been acquired by your organisation details
EPUB
55 loans, One at a time
Details
EPUB
40 loans, 10 Concurrent loans
Details

#1 In 1124, King Louis VI of France received word that his country was about to be invaded by the German emperor and English king. He hurried to the Abbey of Saint-Denis, and prayed to Saint Denis for the safe deliverance of France.

#2 The Abbey of Saint-Denis, the religious capital of France, was not the most impressive looking building. It housed many relics, and it was constantly being visited by pilgrims. But Abbot Suger still felt it was not grand enough.

#3 Suger was a monk who was appointed abbot of Saint-Denis in 1122. He was a proponent of the simple, pious life, but he also enjoyed good food and drink, and he never renounced his indulgences.

#4 Abbot Suger was a very pious man, and he was also a historian who wrote prolifically. He was also well-traveled, and became an intimate of the powerful. He was able to transform the church at Saint-Denis, and in doing so, change the direction of ecclesiastical architecture.