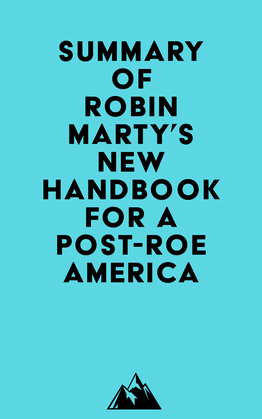 Summary of Robin Marty's New Handbook for a Post-Roe America

by   Everest Media (Author)
Excerpt
Nonfiction Social science Social work
warning_amber
One or more licenses for this book have been acquired by your organisation details
EPUB
55 loans, One at a time
Details
EPUB
40 loans, 10 Concurrent loans
Details

#1 The Roe v. Wade ruling made it legal for a person to obtain an abortion until the point of fetal viability, which was assumed to be at around twenty-eight weeks’ gestation. But state and federal legislators quickly began restricting abortion access, and the biggest impact was on poor people of color.

#2 The Supreme Court decided in 1992 that states cannot outright ban abortion, but they can put laws in place if those laws are meant to protect the health and well-being of the person trying to end the pregnancy.

#3 The Right wants to bring at least one of these model bills to the Supreme Court in order to overturn Roe v. Wade and let states make abortion illegal within their borders.

#4 If a federal twenty-week abortion ban is passed and signed into law, it will be sent to the Supreme Court for review if anyone chooses to challenge it. If the court rules that abortion legality should be left to the states, this ends Roe and allows the trigger laws to go into effect, allowing total bans in other states.