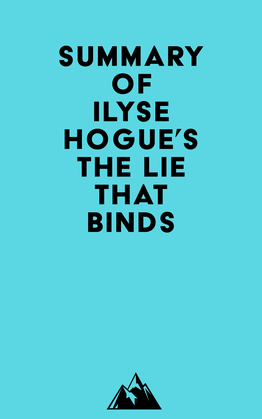 Summary of Ilyse Hogue's The Lie That Binds

by   Everest Media (Author)
Excerpt
Nonfiction Social science Social work
warning_amber
One or more licenses for this book have been acquired by your organisation details
EPUB
55 loans, One at a time
Details
EPUB
40 loans, 10 Concurrent loans
Details

#1 Weyrich was a behind-the-scenes man who had helped build the conservative movement. But in 1990, he gave a speech at an Ethics and Public Policy Conference where he explained to the conservative foot soldiers that they had spent so much time repeating the myth that they originated from backlash to the 1973 Roe v. Wade decision, that they had come to believe it themselves.

#2 The story of the conservative movement is not a story of true believers, but rather a story of a marriage between wild-eyed zealots and cynical political operatives who have long sought to profit from inflaming the anger, resentment, prejudice, and fear of a small minority of Americans.

#3 Evangelical leaders began to fear the loss of white supremacy, and began to flex their political muscle. They pushed for all-white, church-affiliated schools that became known as segregation academies across the South.

#4 Following the Supreme Court’s decision in Green v. Connally, Weyrich began searching for ways to activate evangelical voters. He had already tried to politicize the Equal Rights Amendment, school prayer, and even abortion, but nothing had clicked until desegregation sparked outrage among white Evangelicals.