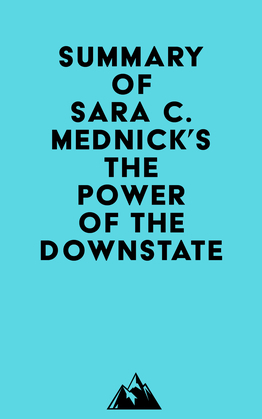 Summary of Sara C. Mednick's The Power of the Downstate

#1 The autonomic nervous system is the ultimate expression of the push-pull relationship between your Upstate and Downstate. It works in your favor when well-tuned, but can conspire against you when your response to stress creeps unchecked into your life.

#2 I was a late bloomer when it came to learning about the brain. I had spent my childhood dreaming of a career on the stage and screen, but after several hundred cattle call auditions, I realized that I needed to find another way to make it in this life.

#3 The human brain is not just a circuit board of wires and resistors, but a biological organ composed of billions of neurons. Neurons are limited in resources, and they require programmed breaks that grant time to recharge and prepare for the next power punch.

#4 Neurons have two states: resting and firing. As the neuron moves between these two states, electrically charged ions flow between the inside and outside of the cell walls. At rest, there are far more negatively charged ions inside the cell than outside, with a resting membrane potential of -70mV.