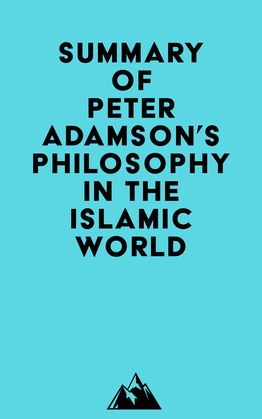 Summary of Peter Adamson's Philosophy in the Islamic World

by   Everest Media (Author)
Excerpt
Nonfiction Human science Philosophy Eastern
warning_amber
One or more licenses for this book have been acquired by your organisation details
EPUB
55 loans, One at a time
Details
EPUB
40 loans, 10 Concurrent loans
Details

#1 The medieval period of Europe overlaps with the formative period of Islam, which was the time up to Avicenna in the 10th century. The Mu’tazilites were a group of theologians who were staunch defenders of God’s unity and human freedom.

#2 The Islamic world experienced a translation movement of Greek scientific works into Arabic in the 8th and 9th centuries, led by the caliphs. However, they failed to enforce theological conformity, and instead left the debates to the scholars or ʿulamāʾ.

#3 The Muslim scholar al-Kindı was the first to translate the works of Greek philosophers and scientists into Arabic. He wrote treatises on a wide range of topics, from cosmology to ethics to the soul, and he often connected these topics to his philosophical ideas.

#4 Al-Kindı’s influence can be traced among a number of thinkers who followed his lead in seeing harmony between Islam and Greek philosophy. The most important representative of this tradition was al-ʿĀmirı, who wrote a reworking of the Arabic Proclus materials.