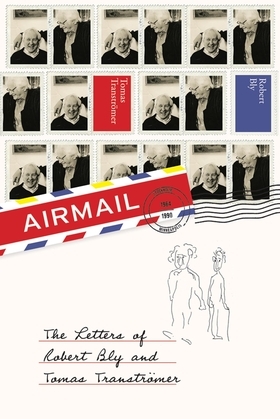 One day in spring 1964, the young American poet Robert Bly left his rural farmhouse and drove 150 miles to the University of Minnesota library in Minneapolis to obtain the latest book by the young Swedish poet Tomas Tranströmer. When Bly returned home that evening with a copy of Tranströmer's The Half-Finished Heaven, he found a letter waiting for him from its author.

With this remarkable coincidence as its beginning, what followed was a vibrant correspondence between two poets who would become essential contributors to global literature. Airmail collects more than 290 letters, written from 1964 until 1990, when Tranströmer suffered a stroke that has left him partially paralyzed and diminished his capacity to write.

Across their correspondence, the two poets are profoundly engaged with each other and with the larger world: the Vietnam War, European and American elections, and the struggles of affording a life as a writer. Airmail also illuminates the work of translation as Bly began to render Tranströmer's poetry into English and Tranströmer began to translate Bly's poetry into Swedish. Their collaboration quickly turned into a friendship that has lasted fifty years.

Insightful, brilliant, and often funny, Airmail provides a rare portrait of two artists who have become integral to each other's particular genius. This publication marks the first time letters by Bly and Tranströmer have been made available in the United States.