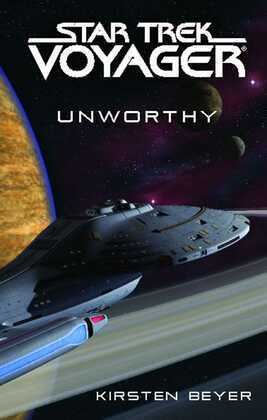 The greatest threat to the Federation was wiped out in one thought by the Caeliar. Starfleet needs to know if Caeliar are gone—so they send out the crew who can find answers in the Delta Quadrant-Voyager.

Freed with a thought, the greatest menace to humanity, the Borg, are gone, absorbed into the Caeliar gestalt. But are they? Can this deadly menace that has hovered over humanity for decades truly be gone? Might some shadow of the Caeliar remain? The Federation decides that they have to know, and Starfleet is ordered to find out.

The Starship Voyager leads a fleet into a region of space that has lived in fear of instant annihilation for generations: the Delta quadrant, home of the Borg. Afsarah Eden—the new captain of Voyager—is charged with getting answers, to reach out to possible allies and resolve old enmities in the Delta quadrant.

The perfection that was given to the Borg was withheld from Seven of Nine. Left behind, she is living a twilight existence—neither Borg nor human—and slowly going mad. The whispers of the Collective, comforting murmurs she has always known, are replaced with a voice deep within her that keeps insisting she is Annika Hansen. Chakotay, the former captain of Voyager, offers to help Seven rendezvous with the ships that Starfleet Command has sent into the Delta quadrant, the probable destination of the mysterious Caeliar.

These are not the friendly stars of the Federation; the unknown and the unexpected are the everyday.