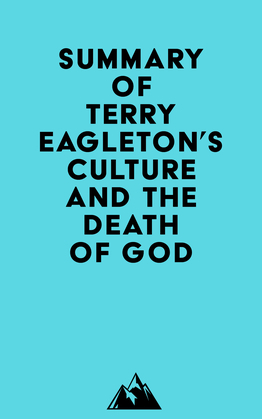 Summary of Terry Eagleton's Culture and the Death of God

#1 The modern age is characterized by a decline in religious faith, which is not necessarily accompanied by a decline in church attendance or Roman Catholics being childless. It is when religion begins to interfere with your everyday life that it is time to give it up.

#2 The privatisation of the symbolic sphere is a strictly relative matter. In modern times, one of the most blatant refutations of the claim that religion has disappeared from public life is the United States.

#3 The eighteenth century Enlightenment in France, Germany, and elsewhere in continental Europe was a continuation of the fierce sectarian conflicts that had torn the continent apart in the previous centuries. It was preoccupied with religion, and its chief preoccupation was the war against ecclesiastical authority, theological views, and religion as an instrument of social and political oppression.

#4 The Enlightenment was not anti-religious, but it was not especially religious either. It was a movement that sought to replace a benighted version of religious faith with one that might grace coffee-house conversation in the Strand.