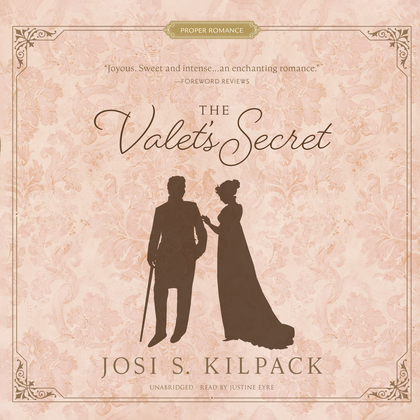 A passionate kiss from a handsome valet becomes a Regency Cinderella story when he is revealed to be an earl.

As a once happily married woman, Rebecca Parker lived a charmed life, but now widowed and working for a living, she feels alone and living a mundane existence. That is until the day a valet speeding by on a horse nearly runs her off the road. Mr. Malcolm Henry is apologetic, gentle, and very handsome. She’s instantly drawn to him, which is why, rather than stopping him from kissing her, she finds herself kissing him back, reigniting a nearly forgotten passion in her. But love at first sight only happens in fairy tales—never to an ordinary woman like her.Still, she cannot stop thinking about Mr. Henry and the kiss they shared. The more time she spends with the earl’s valet, the more she knows she cannot in good conscience allow Mr. Timoltson to continue to court her, even though a marriage to him would provide her financial security and independence from her overbearing father’s control. The heart wants what it wants, and her heart wants Mr. Henry.But while working in the kitchens during a fancy dinner party, she sees something strange: the valet—the valet she kissed—is sitting at the right hand of the baroness. She realizes that Mr. Henry is not the earl’s valet; he is the earl—Kenneth Winterton.Heartbroken, angry, and betrayed, Rebecca isn’t sure she can trust Lord Winterton, much less accept his apology. But when Lord Winterton proves he is as kind and gentle as “Mr. Henry” was, she finds herself willing to give him a second chance. But will he still take a chance on her, when choosing a commoner means he might lose his inheritance?Trust, love, loneliness, and passion collide in this story about a man who will risk it all to fight for the woman he loves and a woman who no longer believes in fairy tales—until she finds herself living in one.