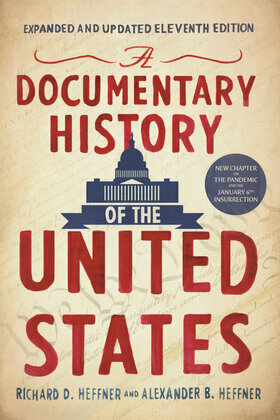 A Documentary History of the United States (11th Edition)

by Richard D. Heffner (Author), Alexander B. Heffner (Author)
Excerpt
Nonfiction History History by country United States Literary collections American
warning_amber
One or more licenses for this book have been acquired by your organisation details
EPUB
Unlimited loans, 2 years, One at a time
Details

“An indispensable contribution to the understanding of our heritage.” – Robert A. Caro

“This insightful collection will fascinate, delight, and challenge all who are interested in the progress of the American nation.”—Annette Gordon-Reed

Here, in a single volume, are the documents (speeches, letters, tweets, Supreme Court decisions, and more) that have forged American history. This 11th edition is now updated with a new chapter on the COVID-19 pandemic, the January 6, 2021 insurrection, and the Biden presidency.

Accompanied by interpretations of their significance by noted historian Richard D. Heffner and journalist Alexander B. Heffner, the important documents in this book include:

More Than One Million Copies Sold!