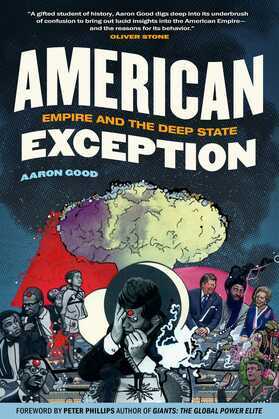 American Exception seeks to explain the breakdown of US democracy. In particular, how we can understand the uncanny continuity of American foreign policy, the breakdown of the rule of law, and the extreme concentration of wealth and power into an overworld of the corporate rich. To trace the evolution of the American state, the author takes a deep politics approach, shedding light on those political practices that are typically repressed in “mainstream” discourse.

In its long history before World War II, the US had a deep political system—a system of governance in which decision-making and enforcement were carried out within—and outside of—public institutions. It was a system that always included some degree of secretive collusion and law-breaking. After World War II, US elites decided to pursue global dominance over the international capitalist system. Setting aside the liberal rhetoric, this project was pursued in a manner that was by and large imperialistic rather than progressive. To administer this covert empire, US elites created a massive national security state characterized by unprecedented levels of secrecy and lawlessness. The “Global Communist Conspiracy” provided a pretext for exceptionism—an endless “exception” to the rule of law.

What gradually emerged after World War II was a tripartite state system of governance. The open democratic state and the authoritarian security state were both increasingly dominated by an American deep state. The term deep state was badly misappropriated during the Trump era. In the simplest sense, it herein refers to all those institutions that collectively exercise undemocratic power over state and society. To trace how we arrived at this point, American Exception explores various deep state institutions and history-making interventions. Key institutions involve the relationships between the overworld of the corporate rich, the underworld of organized crime, and the national security actors that mediate between them. History-making interventions include the toppling of foreign governments, the launching of aggressive wars, and the political assassinations of the 1960s. The book concludes by assessing the prospects for a revival of US democracy.