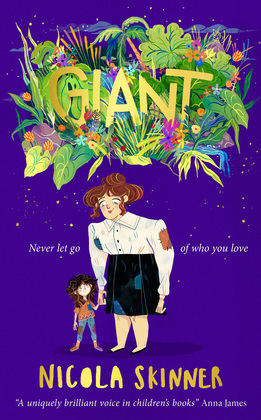 ‘Readers will be laughing and crying all at once. This book is an astonishing, unique feat of the imagination’

From critically acclaimed author Nicola Skinner, her most brilliant book yet – a darkly comic story about staying true to yourself and the people you love, even if it means tearing everything down . . .

There’s absolutely nothing wrong with Minnie’s island. Nothing, that is, apart from the earthquakes, which pull buildings and schools and houses down on a regular basis.

Luckily, the island’s inhabitants have found a way to fix their crumbling walls: giants. Giants look after human children, like eleven-year-old Minnie. When Minnie turns twelve, she’ll kiss her giant, turning her into a stone statue forever. The stone will be used to repair buildings. And there’s nothing wrong with that either . . . or so Minnie thinks.

But when a dreadful earthquake strikes, Minnie realises she’s not quite ready to say goodbye to her giant – not forever – not yet. So Minnie goes on the run, betraying her parents and everyone she knows. The secrets she uncovers on her journey threaten to pull everything down: and so begins a desperate race against time in which she will confront the truth about her island, her giant . . . and ultimately herself.