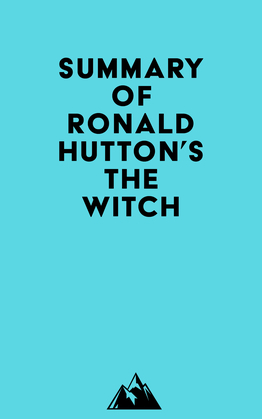 Summary of Ronald Hutton's The Witch

by   Everest Media (Author)
Excerpt
Nonfiction Esotericism, occult UFOs and unexplained phenomena
warning_amber
One or more licenses for this book have been acquired by your organisation details
EPUB
55 loans, One at a time
Details
EPUB
40 loans, 10 Concurrent loans
Details

#1 The four distinguishing features of the European witch stereotype are that they are believed to work primarily on neighbors and kin rather than strangers, they are generally hostile to society, they are not allowed to use legitimate means of pursuing feuds or rivalries, and they must be resisted.

#2 The five definitive components of the witch figure are the subject of much debate among experts in the European witch trials. However, they do provide a more precise checklist of characteristics than has been used previously.

#3 The shift within anthropology itself, as the European colonial empires dissolved, was a reaction against the traditional framework of the discipline. It was hostile to the imposition of European terms and concepts on other societies, and it preferred to study particular communities as unique entities.

#4 The change in anthropology was reflected in the study of witchcraft. The concept of the witch was dissolved into a larger framework of reference, and historians were warned off using ethnographic material.