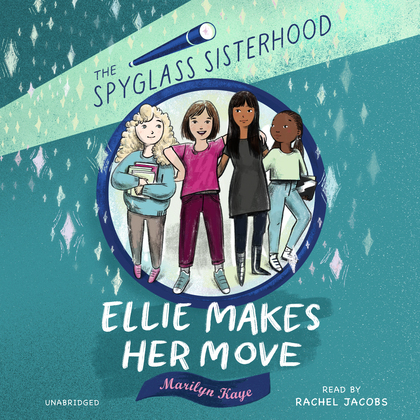 A magical spyglass reveals secrets that will bring four girls together in this new series.

Twelve-year-old Ellie is ordinary. Absolutely, positively ordinary. Then her dad's latest community project makes their whole ritzy town, including all of Ellie's friends, turn against them. Tired of being ostracized, Ellie's family moves to the other side of the state to live in a rickety 100-year-old house complete with a turret—and Ellie swears off friendship forever.

That is until Ellie explores the turret and discovers an old-fashioned telescope—a spyglass. When she looks through it, the world she sees isn't the same that's out the window. There's a community center that isn't built yet and her new classmate Alyssa is flying around on a broomstick!

To figure out what the magical images mean, Ellie recruits other self-described loners, Alyssa and Rachel. When they see a vision of fellow student Kiara playing tag with a tiger and a donkey—they have their first real spyglass secret to solve.

The New York Times bestselling author behind the Gifted series and the Replica books, Marilyn Kaye delivers a story filled with light magic and heart in this first book in the Spyglass Sisterhood series. Each girl will take a turn at the spyglass, confronting fears and sticking up for her peers.