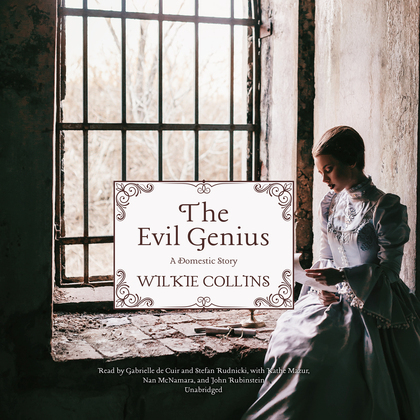 “In one respect, men are all alike; they hate to see a woman in tears.”

Paired with Blackstone’s and Skyboat Media’s production of Wilkie Collins’s The Evil Genius, Skyboat Media presents the dramatic adaptation of the novel, also by Wilkie Collins. Although both versions of the story were written at the same time, the play has never before been published and was only ever performed once on the stage. In fact, it is almost entirely unknown and is otherwise unavailable.

Miss Sydney Westerfield has been saved from a lonely life of teaching at her aunt’s school and taken into service as a governess for Kitty, daughter of Herbert and Catherine Linley. Kitty simply adores Sydney, and Catherine does as well for the governess’s warmth and kindness as a caretaker and a member of their household. But when Herbert and Sydney fall in love, it is only a matter of time before the truth must come out—helped along, of course, by Catherine’s mother, the fierce gossip and foremost meddler Mrs. Presty.

Infidelity, divorce, and child custody are at the forefront of this tale of domestic drama, but Wilkie Collins takes a most modern approach to the view of women in such situations. Not only does Collins offer sympathy—empathy even—for these women that was not at all common at the time, he also remembers to keep a spotlight on young Kitty, whose life will be forever shaped by the affairs of the adults around her.

This full-cast recording of both the novel and the play will fully immerse you in a truly forward-thinking portrait of love and betrayal.