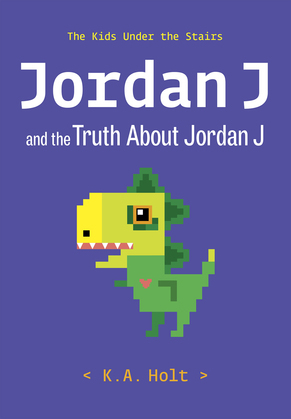 Jordan J and the Truth About Jordan J

The Kids Under the Stairs
by K.A. Holt (Author)
Excerpt
Fiction Juvenile & young adult Themes School & education Social situations Self-esteem & self-reliance Stories in verse
warning_amber
One or more licenses for this book have been acquired by your organisation details
EPUB
Unlimited loans, One at a time
Details

This laugh-out-loud, honest novel-in-verse from award-winning author K.A. Holt tells the story of Jordan J—an opinionated middle schooler trying to find his place at school, at home, and even on the dance floor.

Jordan J has a lot to say.

Most people—including his parents, his teacher, the kids under the stairs, and even his own self—don't understand why he says all the things he says. It's probably the reason he's managed to earn a personal grudge from the school's dance team, the Hart Rocketeers, who are outraged by his brutally honest dance reviews in the school newspaper.

Basically the only thing he can concentrate on these days is performing on his favorite dance show, Fierce Across America. But with his mom's recent unemployment and money being so tight at home, his dreams are crashing. Suddenly, an opportunity arises in the form of Casey Price, the only Rocketeer who doesn't hate his guts. With her help, Jordan J just might have the chance to showcase his electric moves on national TV. But as he starts spending more time with Casey and less with his old friends, Jordan J begins to wonder how he can ever make everyone happy—including himself.

With a lovable cast of characters, never-before-seen dance moves, and bighearted passion, this exhilarating, laugh-out-loud novel-in-verse tells an honest, authentic story about friendship, dance, and self-confidence that celebrates different types of intelligence and shows how every kid deserves to become their own "divergent" self.

This third book in K.A. Holt's The Kids Under the Stairs series, Jordon J and the Truth About Jordan J will appeal to fans of House Arrest, Rhyme Schemer, and Knockout, in addition to fans of Jason Reynolds's Track series.

RENOWNED AUTHOR: K.A. Holt's books have been nominated for awards in more than 30 states. She is a trusted name and a favorite for middle grade readers!

PERFECT FOR RELUCTANT READERS: This book is written in free verse and includes a variety of other elements—chat logs, bullet-pointed lists, newspaper articles, and illustrations—welcoming readers It all different types of readers. The characters in the book also struggle with reading, but they are not shamed or looked down on for it, so readers with similar issues will feel understood.

VIDEO GAME APPEAL: The characters in the book play Sandbox, which readers will instantly recognize as a fictionalized version of Minecraft, an immensely popular game. Playing Sandbox is depicted as both cool and educational, which will uplift rather than shame young readers for playing video games.