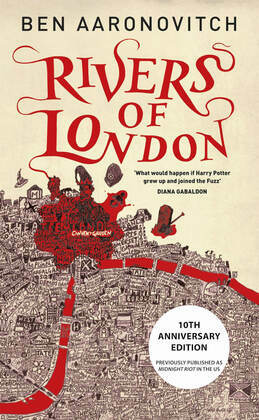 Restored to its original British title Rivers of London, this Author’s Preferred Edition includes revised text never before seen by US readers and a new introduction by the author.

My name is Peter Grant and until recently I was just another probationary constable in that mighty army for justice known to all right thinking people as the Metropolitan Police and by everyone else as the filth. My only concerns in life were avoiding a transfer to the Case Progression Unit – We do paperwork so other coppers don’t have to – and where to get a hot coffee while on late shift. Then one night, in pursuance of a murder inquiry, I tried to take a witness statement from a man who was dead, but disturbingly voluble and that brought me to the attention Chief Inspector Nightingale, the last wizard in Britain.

And that, as they say, is where the story really starts.

Now I’m in plain clothes and the first apprentice wizard in fifty years, and my world has become somewhat more complicated. Now I’m dealing with nests of vampires in Purley, negotiating a truce between the warring god and goddess of the River Thames and digging up graves in Covent Garden – and that’s just the routine stuff.

Because there’s something festering at the heart of the city I love, a malicious, vengeful spirit that takes ordinary Londoners and twists them into grotesque mannequins to act out its drama of violence and despair.

The spirit of riot and rebellion has awakened in the city, and it’s fallen to me to bring order out of chaos – or die trying. Which, I don’t mind telling you, would involve a hell of a lot of paperwork.

Reviews for Rivers of London
‘… fresh and original and a wonderful read. I loved it.’ — Charlaine Harris