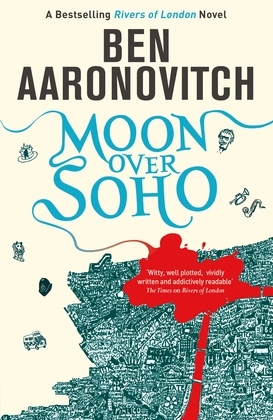 ‘Moon Over Soho cements [the Rivers of London] series as my favorite urban fantasy series. The humor, the world-building, the action, the magic, the mystery, the procedural—all are top-notch.’ — Ranting Dragon

My name is Peter Grant, and I’m a Police Constable in that mighty army for justice known as the Metropolitan Police (a.k.a. the Filth). I’m also an apprentice wizard, the first in fifty years.

When your dad is an almost famous jazz trumpeter, you know the classics. And that’s why, when Dr Walid called me down to the morgue to listen to a corpse, I recognized the tune it was playing as the jazz classic ‘Body and Soul.’ Something violently supernatural had happened to the victim, strong enough to leave its imprint on his corpse as if it were a wax cylinder recording. The former owner of the body, Cyrus Wilkinson, was a part-time jazz saxophonist and full-time accountant who had dropped dead of a heart attack just after finishing a gig.

He wasn’t the first, but no one was going to let me exhume corpses just to see if they were playing my tune. So it was back to old-fashioned police legwork, starting in Soho, the heart of the scene, with the lovely Simone – Cyrus’s ex-lover, professional jazz kitten and as inviting as a Rubens portrait – as my guide. And it didn’t take me long to realise there were monsters stalking Soho, creatures feeding off that special gift that separates the great musician from someone who can raise a decent tune. What they take is beauty. What they leave behind is sickness, failure and broken lives.

Reviews for Moon Over Soho
Mr. Aaronovitch is, in short, writing the best contemporary occult detective series on the shelf today, and that’s by a substantial margin.’ — Pornokitsch

‘Moon Over Soho is a gripping continuation of River of London’s well executed blend of police-procedural and fantasy with a good splash of horror thrown in. This is urban fantasy done with a loving attention to detail and enlivened by an ever present wit making this series a must-read for anyone who likes their fantasy with a strong edge of realism.’ — SF Book Reviews