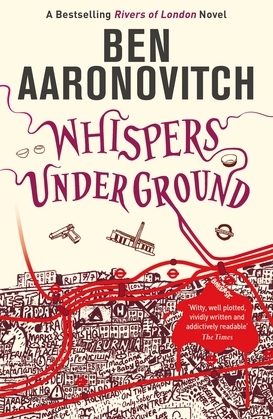 My name is Peter Grant, police officer, apprentice wizard and well dressed man about town. I work for ECD9, otherwise known as the Folly, and to the Murder Investigation Team as ‘oh god not them again.’ But even their governor, the arch sceptic and professional northerner DCI Seawoll, knows that sometimes, when things go bump in the night, they have to call us in.

Which was why I found myself in an underground station at five o’clock, looking at the body of James Gallagher, US citizen and Arts Student. How did he avoid the underground’s ubiquitous CCTV to reach his final destination, and why is the ceramic shard he was stabbed with so strongly magical?

As the case took me into the labyrinth of conduits, tunnels and abandoned bomb shelters that lay beneath the streets I realised that London below might just be as complicated and inhabited as London above.

And worse, James Gallagher’s father is a US senator, so the next thing I know, I’ve got Special Agent Kimberley Reynolds of the FBI “liaising” with the investigation and asking awkward questions. Such as ‘just what are you guys hiding down here’ and ‘how did you conjure that light out thin air?’

Reviews for Whispers Underground
‘One of the most refreshing things about former Doctor Who writer Aaronvitch’s Rivers of London series of magical procedurals is that they are blessedly free of manufactured rivalries.... This fast, engrossing novel is enjoyable, cheerful, and accessible to new readers.’ — Publishers Weekly

‘Ben Aaronovitch writes some of the funniest prose in current fantasy. These books are extremely entertaining, mainly because narrator Peter Grant has a hilarious voice and a sly sense of humor… quirkily effective prose and dry humor, making it a pure pleasure to read.’ — Tor.com

‘The prose is witty, the plot clever and the characters incredibly likeable…’ — Time Out