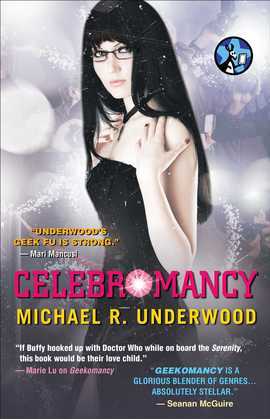 Fame has a magic all its own in the no-gossip-barred follow-up to Geekomancy. Ree Reyes gets her big screenwriting break, only to discover just how broken Hollywood actually is.

Things are looking up for urban fantasista Ree Reyes. She?s using her love of pop culture to fight monsters and protect her hometown as a Geekomancer, and now a real-live production company is shooting her television pilot script.

But nothing is easy in show business. When an invisible figure attacks the leading lady of the show, former child-star-turned-current-hot-mess Jane Konrad, Ree begins a school-of-hard-knocks education in the power of Celebromancy.

Attempting to help Jane Geekomancy-style with Jedi mind tricks and X-Men infiltration techniques, Ree learns more about movie magic than she ever intended. She also learns that real life has the craziest plots: not only must she lift a Hollywood-strength curse, but she needs to save her pilot, negotiate a bizarre love rhombus, and fight monsters straight out of the silver screen. All this without anyone getting killed or, worse, banished to the D-List.