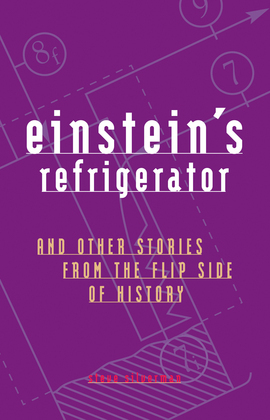 And Other Stories from the Flip Side of History
by Steve Silverman (Author)
Excerpt
Nonfiction Health & fitness Anxieties and stress
warning_amber
One or more licenses for this book have been acquired by your organisation details
EPUB
Unlimited loans, One at a time
Details

Steve Silverman was looking for a way to add some spice to his high school lectures when he realized that weird and bizarre true-life stories would capture his students' attention. In fact, they worked so well that the science teacher then began posting his discoveries to his own Web site, which he dubbed Useless Information. Well-researched and clearly sourced, Silverman's unusual tidbits have gained a wide following.

In Einstein's Refrigerator, Silverman collects more than 30 of the most fascinating stories he has gathered--tales of forgotten genius, great blunders, and incredible feats of survival, as well as answers to puzzling questions.

Einstein's Refrigerator is a remarkable book with spellbinding stories. Whatever happened to the refrigerator Einstein helped invent? While it never became a commercial success, its underlying concepts became the basis for cooling nuclear breeder reactors.