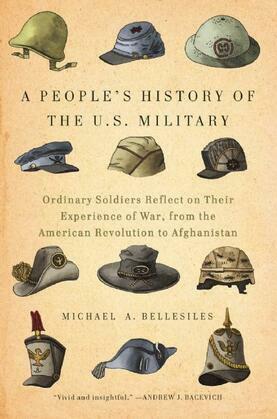 A People's History of the U.S. Military

by Michael A. Bellesiles (Author)
Excerpt
Nonfiction History History by country United States Other Veterans Other Social history
EPUB
Unlimited loans, One at a time
Details
In A People's History of the U.S. Military, historian Michael A. Bellesiles draws from three centuries of soldiers' personal encounters with combat?through fascinating excerpts from letters, diaries, and memoirs, as well as audio recordings, film, and blogs?to capture the essence of the American military experience firsthand, from the American Revolution to the wars in Iraq and Afghanistan.

Military service can shatter and give meaning to lives; it is rarely a neutral encounter, and has contributed to a rich outpouring of personal testimony from the men and women who have literally placed their lives on the line. The often dramatic and always richly textured first-person accounts collected in this book cover a wide range of perspectives, from ardent patriots to disillusioned cynics; barely literate farm boys to urbane college graduates; scions of founding families to recent immigrants, enthusiasts, and dissenters; women disguising themselves as men in order to serve their country to African Americans fighting for their freedom through military service.

A work of great relevance and immediacy?as the nation grapples with the return of thousands of men and women from active military duty?A People's History of the U.S. Military will become a major new touchstone for our understanding of American military service.
Publication date
September 11, 2012
Publisher
The New Press
Page count
384
ISBN
9781595587138
Paper ISBN
9781595589354