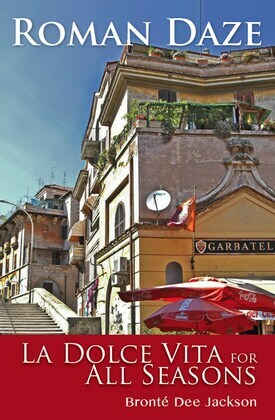 It took only three days to fall in love with Rome. Like all infatuations, I expected it to wear off. I decided that I would leave when I no longer noticed the Coliseum. I am still waiting.'

Twenty years ago, Bronte Jackson won an airline ticket that thrust her into the heart of the Mediterranean. Recently separated, made redundant and evicted from her home, Bronte spent six months recovering in Greece and spending her redundancy package, before making her way to Rome. Roman Daze: La Dolce Vita for All Seasons is a book about living a personal and continuously surprising adventure. It's about following your heart and what it's like to live among people who continuously use theirs.

In Roman Daze, Bronte Jackson describes how the seasons, food, family, landscape, rituals and history combine to create and explain the Italian lifestyle and why, from the outside, it looks like la dolce vita.