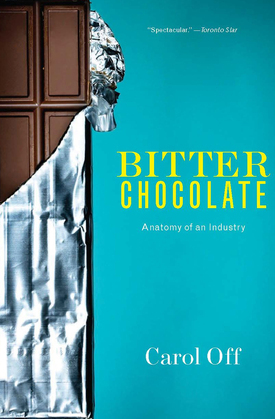 This shocking exposé of the corruption and exploitation at the heart of the multibillion-dollar cocoa industry is “an astounding eye-opener that takes no prisoners” (Quill & Quire, starred review).

Bitter Chocolate is both an absorbing social history and a passionate investigation into an industry that has institutionalized abuse as it indulges our whims. Award-winning journalist Carol Off traces the fascinating evolution of chocolate from the sixteenth century banquet table of Montezuma’s Aztec court to the bustling factories of Hershey, Cadbury, and Mars. In what will be a shocking revelation to many, Off exposes how slavery and injustice remain a key aspect of its production even today.

In the Ivory Coast, the world’s leading producer of cocoa beans, profits from the multibillion-dollar chocolate industry fuel bloody civil war and widespread corruption. Faced with pressure from a crushing “cocoa cartel” demanding more beans for less money, poor farmers have turned to the cheapest labor pool possible: thousands of indentured children who pick the beans but have never themselves known the taste of chocolate.

“Bitter Chocolate is less a book about chocolate than it is a study of racism, imperialism and oppression as told through the lens of a single commodity.” —The Globe and Mail (Toronto)