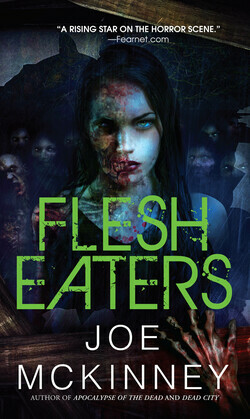 Dead World #3
by Joe McKinney (Author)
Excerpt
Fiction Horror Occult & supernatural Supernatural creatures Zombies English literature American and Canadian literature
warning_amber
One or more licenses for this book have been acquired by your organisation details
EPUB
Unlimited loans, One at a time
Details

Battered by three devastating hurricanes in a row, the Texas coast is flattened. But for the people of Houston--and soon all of America--the most terrifying events are just beginning. . .

Out of the flooded streets of Houston, they emerge from plague-ridden waters. Dead. Rotting. Hungry. And as human survivors scramble to their rooftops for safety, the zombie hordes circle like sharks. The ultimate killing machines.

Houston is quarantined to halt the spread of the zombie plague. Anyone trying to escape is shot on sight--living and dead. Emergency Ops sergeant Eleanor Norton has her work cut out for her. Salvaging boats and gathering explosives, Eleanor and her team struggle to maintain order. But when civilization finally breaks down, the feeding frenzy begins.

Biting, gnawing, feasting--but always craving more--the flesheaters increase their ranks every hour. With doomsday looming, Eleanor must focus on the people she loves--her husband and daughter--and a band of other survivors adrift in zombie-infested waters. If she can't bring them into the quarantine zone, they're all dead meat.

Praise for Joe McKinney and His Novels

"Compelling. . .with a lightning-fast pace. Earns its place in any library of living dead fiction." --New York Times Bestselling Author Jonathan Maberry on Apocalypse of the Dead