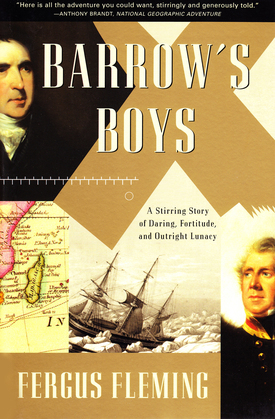 by Fergus Fleming (Author)
Excerpt
Nonfiction History History by country United States Other Military Travel Europe Great Britain
EPUB
Unlimited loans, One at a time
Details
From the author of Ninety Degrees North, a spellbinding account of how officers of the British Navy explored the world after the Napoleonic Wars.

In 1816, John Barrow, second secretary to the British admiralty, launched the most ambitious program of exploration the world has ever seen. For the next thirty years, his handpicked teams of elite British naval officers scoured the globe from the Arctic to Antarctica, their mission: to fill the blanks that littered the atlases of the day.

Barrow’s Boys is the spellbinding story of these adventurers, the perils they faced—including eating mice, their shoes, and even each other to survive—and the challenges they overcame on their odysseys into the unknown. Many of these expeditions are considered the greatest in history, and here they’ve been collected into one volume that captures the full sweep of Barrow’s program.

“Here is all the adventure you could want, stirringly and generously told.” —Anthony Brandt, National Geographic Adventure

“History at its most romantic.” —The Columbus Dispatch

“A sure bet for fans of Caroline Alexander’s The Endurance, this captivating survey of England’s exploration during the nineteenth century illuminates a host of forgotten personalities.” —Publishers Weekly