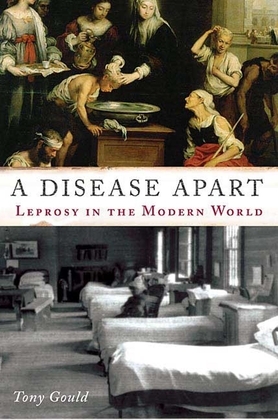 This fascinating cultural and medical history of leprosy enriches our understanding of a still-feared biblical disease.

It is a condition shrouded for centuries in mystery, legend, and religious fanaticism. Societies the world over have vilified its sufferers: by the sheer accident of mycobacterial infection, they have been condemned to exile and imprisonment?illness itself considered evidence of moral taint.

Over the last 200 years, the story of leprosy has witnessed dramatic reversals in terms of both scientific theory and public opinion. In A DISEASE APART, Tony Gould traces the history of this compelling period through the lives of individual men and women: intrepid doctors, researchers, and missionaries, and a vast spectrum of patients.

We meet such pioneers of treatment as the Norwegian microbe hunter, Armauer Hansen. Though Hansen discovered the leprosy bacillus in l873, the 'heredity vs. contagion' debate raged on for decades. Meanwhile, across the world, Belgian Catholic missionary Father Damien became an international celebrity tending to his stricken flock at the Hawaiian settlement of Molokai. He contracted the disease himself. To the British, leprosy posed an "imperial danger" to their sprawling colonial system. In the l920s Sir Leonard Rogers of the Indian Medical Service found that the ancient Hindu treatment of chaulmoogra oil could be used in an injectable form.

The Cajun bayou saw the inspiring rise of leprosy's most zealous campaigner of all: a patient. At Carville, Louisiana, a Jewish Texan pharmacist named Stanley Stein was transformed by leprosy into an eloquent editor and writer. He ultimately became a thorn in the side of the U.S. Public Heath Department and a close friend of Tallulah Bankhead.

The personalities met on this journey are remarkable and their stories unfold against the backgrounds of Norway, Hawaii, the Philippines, Japan, South Africa, Canada, Nigeria, Nepal and Louisiana. Although since the l950s drugs treatments have been able to cure cases caught early?and arrest advanced cases?leprosy remains a subject mired in ignorance.

In this superb and enlightened book, Tony Gould throws light into the shadows.