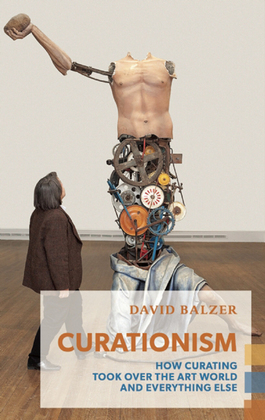 ‘Curate’ is now a buzzword applied to everything from music festivals to artisanal cheese. Inside the art world, the curator reigns supreme, acting as the face of high-profile group shows and biennials in a way that can eclipse and assimilate the contributions of individual artists. At the same time, curatorial studies programs continue to grow in popularity, and businesses are increasingly adopting curation as a means of adding value to content and courting demographics. Everyone, it seems, is a now a curator. But what is a curator, exactly? And what does the explosive popularity of curating say about our culture’s relationship with taste, labour and the avant-garde?

In this incisive and original study, critic David Balzer travels through art history and around the globe to explore the cult of curation – where it began, how it came to dominate museums and galleries, and how it was co-opted at the turn of the millennium as the dominant mode of organizing and giving value to content. At the centre of the book is a paradox: curation is institutionalized and expertise-driven like never before, yet the first independent curators were not formally trained, and any act of choosing has become ‘curating.’ Is the professional curator an oxymoron? Has curation reached a sort of endgame, where its widespread fetishization has led to its own demise?

David Balzer has contributed to publications including the Believer, Modern Painters, Artforum.com, and The Globe and Mail, and is the author of Contrivances, a short-fiction collection. He is currently Associate Editor at Canadian Art magazine. Balzer was born in Winnipeg and currently resides in Toronto, where he makes a living as a critic, editor and teacher.
Data di pubblicazione
09 settembre 2014
Editore
Coach House Books
Collezione
Exploded Views
Numero di pagine
144
ISBN
9781770563872
ISBN cartaceo
9781552452998