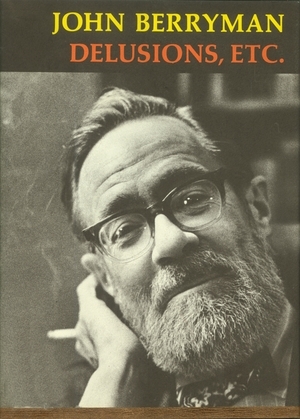 Mr. Berryman's posthumous book of poems, Delusions, Etc., had been completed and was in proof before his death on January 7, 1972. The opening section, "Opus Dei," is a sequence of eight poems based on the offices of the day from Lauds to Compline?the lines above being quoted from Nones. Part two consists of five poems whose subject are George Washington ("Rectitude, and the terrible upstanding member"), Beethoven, Emily Dickinson, Georg Trakl, and Dylan Thomas. The thirteen poems in the third part include "Gislebertus' Eve," "Scholars at the Orchid Pavilion," "Ecce Homo," Tampa Stomp," and "Hello." The fourth part is arranged as a scherzo. It starts with "Navajo Setting the Record Straight" and ends with "Damn You, Jim D., You Woke Me Up." The concluding section is reflective and meditative in tone, with "The Prayer of the Middle-Aged Man," "Somber Prayer," "Minnesota Thanksgiving," and "A Usual Prayer," and a coda that rises to the high spirits of "King David Dances." Delusions, Etc. is an impressive collection of verse by one of the most original poets of our time, whose death at the height of his powers is a tragic loss to letters.