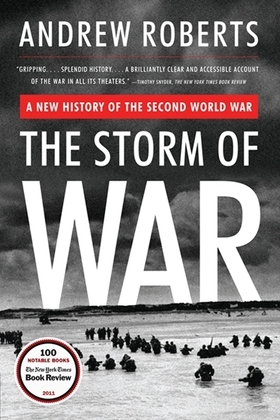 The Storm of War: A New History of the Second World War

by Andrew Roberts (Author)
Excerpt
Nonfiction History World War II
warning_amber
One or more licenses for this book have been acquired by your organisation details
EPUB
26 loans, One at a time
Details

“Gripping. . . . splendid history. A brilliantly clear and accessible account of the war in all its theaters. Roberts’s prose is unerringly precise and strikingly vivid. It is hard to imagine a better-told military history of World War II.” –New York Times Book Review

Andrew Roberts's acclaimed new history has been hailed as the finest single-volume account of this epic conflict. From the western front to North Africa, from the Baltic to the Far East, he tells the story of the war—the grand strategy and the individual experience, the brutality and the heroism—as never before.

Meticulously researched and masterfully written, The Storm of War illuminates the war's principal actors, revealing how their decisions shaped the course of the conflict. Along the way, Roberts presents tales of the many lesser-known individuals whose experiences form a panoply of the courage and self-sacrifice, as well as the depravity and cruelty, of the Second World War.