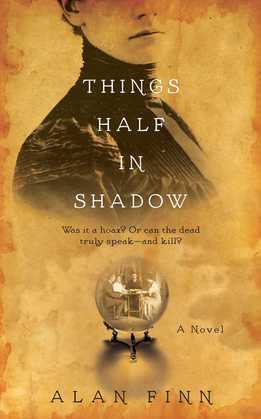 Things Half in Shadow

by Alan Finn (Author)
Excerpt
Fiction Thrillers Occult & supernatural Supernatural creatures Ghost
warning_amber
One or more licenses for this book have been acquired by your organisation details
EPUB
Unlimited loans, 2 years, One at a time
Details

Postbellum America makes for a haunting backdrop in this historical and supernatural tale of moonlit cemeteries, masked balls, cunning mediums, and terrifying secrets waiting to be unearthed by an intrepid crime reporter.

Edward Clark is a successful young crime reporter in comfortable circumstances with a lovely, well-connected fiancée. Then an assignment to write a series of exposés on the city’s mediums places all that in jeopardy.

In the Philadelphia of 1869, photographs of Civil War dead adorn dim sitting rooms, and grieving families attempt to contact their lost loved ones. Edward’s investigation of the beautiful young medium Lucy Collins has unintended consequences, however. He uncovers her tricks, but realizes to his dismay that Lucy is more talented at blackmail than she is at a medium’s sleights of hand. And since Edward has a hidden past, he reluctantly agrees that they should collaborate in exposing only her rivals.

The mysterious murder of noted medium Lenora Grimes Pastor as Lucy and Edward attend her séance results in a plum story for Edward—and a great deal more. The pair want to clear themselves from suspicion, but a search spanning the houses of the wealthy to the underside of nineteenth-century Philadelphia unearths a buzzing beehive of past murder, current danger, and supernatural occurrences that cannot be explained…